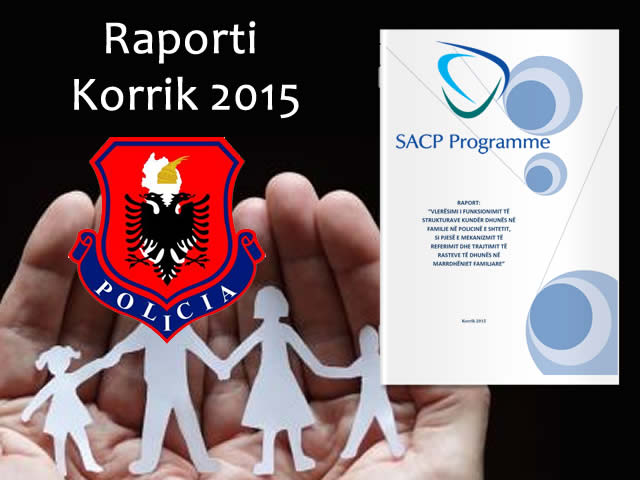 This assessment report is designed to assist employees of the Ministry of Interior and of the Albanian State Police for a better effective planning of steps to be undertaken following the new Strategy on the Community Policing 2015-2017, new Law on State Police, etc., and is part of a series of reports and studies compiled in the frame of Swedish Support to MoI/ASP on Community Policing Programme (SACP). 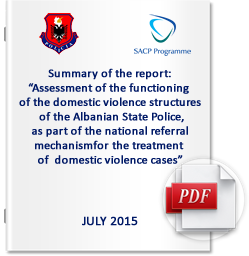 The report is prepared by two experts: Ms. Monika Kocaqi and Ms. Miranda Fishka, both PhD candidates, and was revised from the advisory team composed by Ms. Silvana Alimadhi, State Police and Mr. Robert Korkuti, SACP’ Director. The draft was consulted with the working group established by SACP with representatives of ASP, as well as with a wide ranger of stakeholders including representatives from sate institutions, international organizations working on the same issues, experts of the field, etc. The feedback and comments received were reflected in the final version of the report, wich was released at the end of JULY 2015.

This assessment is part of the third direction of SACP ’support – combating domestic violence – and is outlined according to its principles, respecting particularly being well-targeted and complementary to the efforts made by other donors and international organizations.

The main focus is the role of the police in handling cases of violence in family relations in the context of the philosophy of community policing, as well as its role as one of the key members of the Referral Mechanism set up for this purpose. The report can be considered also as a complementary part of a series of preliminary studies conducted by the SACP or even following several assessments carried out by other actors in this direction . Its added value remains precisely in exploring the situation within the structures of the State Police and the identification of needs for improving cooperation with other members of the Referral Mechanism, from the perspective of the police officers themselves and intertwined with the philosophy of policing community.

The methodology proposed for conducting this assessment was preliminary approved by SACP. Methods used were mainly qualitative ones: desk review of the existing studies, researches, evaluation reports as well as of the existing legal and policy framework. Additional information was gathered from 17 in-depth interviews (60-80 minutes each) and 3 focus group discussions (around 120 minutes each), with a total of 42 professionals (10 women) from Tirana, Shkodra and Elbasan. read more … [ pdf ]