You are here: Home » MLS with Police work 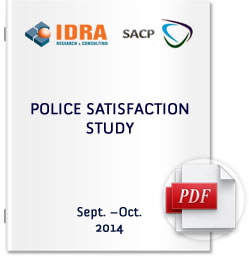 VICTIMIZATION AND THE SENSE OF SAFETY

During this wave of Police Satisfaction Study respondents were asked whether they or their relatives have been victims of burglary or violence in the past 5 years. From the data it can be gathered that 11% of respondents (same as previous wave) have been victims of such crimes. Taking into consideration the European Social Survey (ESS), which compares results for most European countries, for this dimension Albania has not seen any change in its ranking and is positioned below the European average result (16%).

Respondents were asked whether they consider right or wrong to perform actions such as to make an exaggerated/false insurance claim, to buy something that is stolen or to cross a red light in traffic. From the data it can be observed that in general there is a increase in the awareness of respondents regarding the carrying out of such actions.

When asked whether the State Police has the authority to undertake different actions, it can be noticed an increase in the level of respondents that believe that it is the duty of State Police to intervene in various situations. It can be deduced that the rise in perception might be the effect of the latest interventions the State Police has performed during the last 12 months.

The 2014 results show a higher level of awareness related to the citizen’s support in regard to State Police actions, even in the cases where the citizens did not agree with them. Supporting State Police actions is also seen as a duty by most of citizens, scoring 14 points more compared to 2013 (on a scale from 0 to 100, where 0 is “Not at all my duty” and 100 is “Completely my duty”)